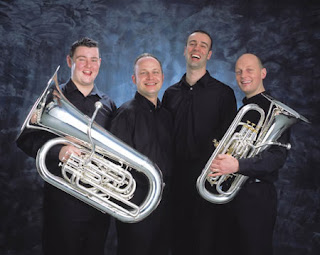 Tubalate is a professional tuba-euphonium quartet based out of England. Their efforts in low brass chamber music have taken them to places like Russia, the United States, Latvia, and many other locales. The group was awarded the prestigious Professional Performance Diploma from the Royal Northern College of Music. Since then, these guys have been constantly pushing the envelope in developing repertoire.

Tubalate encourage educational projects, working in collaboration with organisations such as The Society for the Promotion of New Music (SPNM). The quartet also offers a range of educational concerts and workshops. They have given masterclasses at major music conservatoires including the Royal Northern College of Music (RNCM), Liverpool Institute of Performing Arts (LIPA), the Welsh College of Music and Drama and the St. Petersburg (Russia), and Riga (Latvia) Conservatoires.

Tubalate has completed four recording projects: Light Metal, Episodes, Move, and a CD of contemporary works called Earth and Moon. They are also affiliated with Besson.

Though this group is not a college group, I thought it was important to show trends in tuba-euphonium quartet in a country other than the United States and to demonstrate yet another group's commitment to advancing tuba-euphonium literature. Check out the following list of pieces that Tubalate has either commissioned or written: